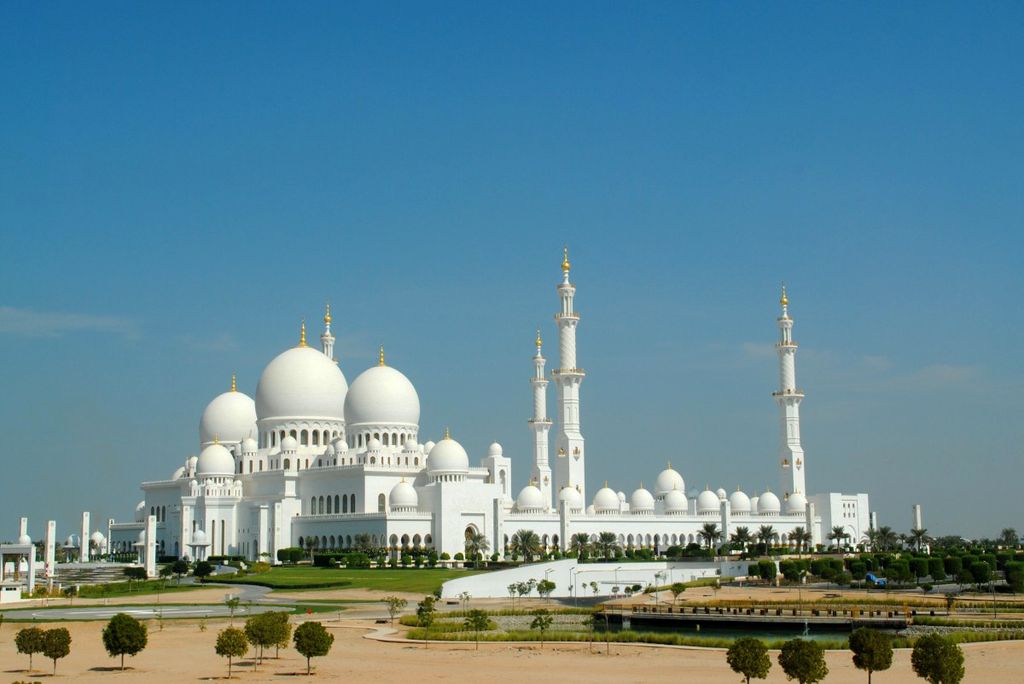 Sheikh Zayed Mosque (Abu Dhabi) is the most majestic and expensive building in the capital of the United Arab Emirates, the construction of which began in 1996. Over $ 545,000,000 was spent on its creation. And, unambiguously, the result justified such expenses – today it is one of the largest and most beautiful temples on the planet, and a photo of the White Mosque in Abu Dhabi can often be seen in famous magazines.

Sheikh Zayed Mosque is a huge Muslim temple, a monumental structure and the personification of luxury and wealth of the UAE. Contrary to popular belief, the White Mosque was not built in Dubai, but in Abu Dhabi. It was inaugurated in 2007, and it bears the name of the first ruler and founder of the United Arab Emirates, whose grave is nearby. This is the only mosque in the city of Abu Dhabi that anyone can visit: since 2008, both Muslim and followers of other religions can come here.

However, this is not the only thing that attracts tourists to the white Zayed mosque. In addition, here you can see the largest carpet in the world (its area is 5627 m²), over which more than 1000 weavers worked. It will also be interesting to take a look at the world’s second largest chandelier, generously inlaid with Swarovski crystals and coated with gold leaf.

The scale of the mosque is amazing: it can accommodate 40,000 people, about 7,000 of which are in the prayer hall. The remaining rooms can simultaneously accommodate 1,500-4,000 visitors.

The white mosque in the UAE capital Abu Dhabi has been under construction for almost 20 years, and covers an area of ​​more than 12 hectares. About 3,000 workers and 500 engineers worked on such a huge project, and professionals from different countries competed to become the chief architect. As a result, they chose Jozef Abdelki, whose ideas were put into practice.

Initially, the White Mosque was built in the Moroccan style, but later elements began to appear that were characteristic of the Persian, Moorish, Turkish and Arabian directions. The main task of the builders was to create a perfectly white structure that would look spectacular not only under the rays of the sun, but also at night. The Macedonian marble coped with this task perfectly, which was used to revetment the external side of the mosque. On the facade of the building you can also see inserts of bright crystals, precious stones and gold. The grandiose building is crowned by 82 snow-white domes. The photos of the white mosque in Abu Dhabi resemble sketches from the famous Arabian fairy tale “1000 and 1 night”.

Zayed Mosque in Abu Dhabi is surrounded by artificial but picturesque canals, which reflect a magnificent building at night.

The temple’s courtyard (its area is 17,000 m²) also deserves attention: tall white columns are decorated with non-traditional mosques with floral ornaments and gold, and a bright floral mosaic is laid out on the marble square itself.

The interior of the White Mosque of Abu Dhabi is even more magnificent and expensive: pearls, emeralds, gold, Iranian carpets and German chandeliers are everywhere. The main room in the mosque is the prayer hall, which houses a kind of center – the Qibla wall, which depicts 99 qualities of Allah. Illuminate the interior of 7 huge chandeliers inlaid with rare stones and multi-colored crystals. The heaviest and most beautiful of them is in the prayer hall.

The facade lighting of the building changes periodically. It depends on the time of day and month of the year. In the photo you can see that most often the Sheikh Zayed Mosque in Abu Dhabi is painted in blue, gray, white, blue and purple.

You may be interested in: What souvenirs to bring from the Emirates?

Although the Sheikh Zayed White Mosque is open to people of different faiths, it is still a sacred place for Muslims in Abu Dhabi, so you must adhere to the following rules:

And, of course, it is worth showing respect for Muslim shrines, even if you are a follower of another religion.

Note: What can not be done in the UAE and how to behave in a Muslim country .

You can get to it from the Dubai bus station (Al Ghubaiba) by regular bus for $ 6.80. However, it is worth considering that from a stop, of course, you will have to go to the mosque for about 20 minutes, which is not always possible due to the weather. Therefore, it is worth thinking about getting a taxi. The trip will cost $ 90-100.

See also: What to see in Abu Dhabi in the first place – 15 attractions

The White Mosque in Abu Dhabi is open daily, and you can get to the temple as a tourist:

During the holy month of Ramadan for Muslims, it is also worthwhile to carefully choose the time to visit the white mosque, because it constantly hosts services and organizes various events for Muslims (“Ramadan Lanterns” and “Our Guests”). By the way, Ramadan, depending on the lunar calendar, lasts from 28 to 30 days, and begins in late spring or early summer.

Visiting the White Mosque is absolutely free. This applies to excursions, and clothing, which if necessary will be issued at the entrance. True, tourists are not allowed into all rooms.

Tours of the mosque in Abu Dhabi

In the White Mosque, free 60-minute excursions are held, during which the guide will introduce tourists to the main temple of the UAE, as well as tell a lot of interesting things about Islam in general. They are carried out in:

The rest of the time, you can also visit the white mosque, however, you will have to use the audio guide to visit the Sheikh Zayed Temple in Abu Dhabi. However, this is far from the worst option, because the device “speaks” in Chinese and Arabic, English and German, Italian and Spanish, Portuguese and French, Hebrew, Japanese and Russian.

In addition to the main halls, the White Mosque has an exhibition hall where you can see exhibits from events such as the Arab Tourism Market, the International Tourism Fair in Abu Dhabi, Arabia Expo, the ITFM Tourism Fair, ITB Berlin and GITEX.

In addition, the mosque annually hosts an exhibition of photographs, “The Space of White Photography,” whose main goal is to show the aesthetics of Islamic architecture. Professional photographers participate in this project, and this competition annually attracts the attention of the world community. The cost of admission to the exhibition at the Sheikh Zayed Mosque in Abu Dhabi is also absolutely free.

By the way, you can start traveling around the largest temple in Abu Dhabi and the UAE as a whole right now, because a virtual tour is available on the official website (www.szgmc.gov.ae/en/). But still it is worth seeing the white Sheikh Zayed Mosque live, because it is recognized as one of the most beautiful temples of our time.

Video: how to enter the mosque, features of visiting and how the temple looks through the eyes of tourists.