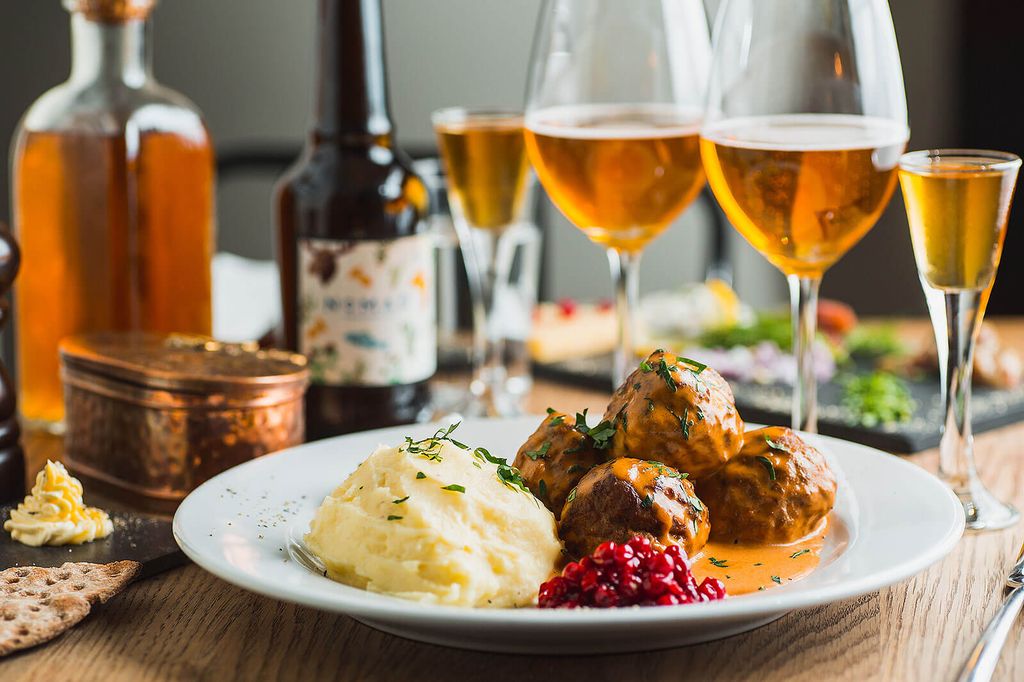 Swedish national dishes are undoubtedly close to people with an open Slavic soul. The menu traditional for the Scandinavian country is full and simple, typical for a peasant table. The menu of many restaurants and cafes in many respects resembles the Slavic menu, and if you are interested in real Swedish cuisine, original treats that have come from the depths of centuries, it is better to go to remote regions of the country.

Characteristic features of the national cuisine of Sweden

Tables in Sweden are often crowded with pickles, but national cuisine cannot be called diverse. Largely due to the fact that spices are not used for cooking. Uniqueness of Swedish cuisine is given by natural tastes. Thanks to this, many national treats are remembered and seem special.

For many centuries, Swedish national cuisine has been shaped by Scandinavian culinary traditions. Of course, the climate and the country’s location on the world map had a special influence on local cuisine. Given the proximity of the Scandinavian country to the sea, and the prevalence of low temperatures, most dishes are characterized by simple cooking technology and an affordable set of ingredients, but satisfying and no less tasty.

Interesting fact! The basis of Swedish dishes are products that can be stored for a long time in a cold climate. In the traditional menu there are no gourmet desserts, treats with a complex composition.

The main technologies for processing products in Scandinavian cuisine:

Fatty varieties of fish and meat are considered traditional for the Swedish menu. By the way, there are practically no vegetarians in the country – with such culinary principles it is very difficult to survive in a country where the cold climate prevails.

Good to know! To increase the calorie content of the food, the products are fried on pork fat.

The main ingredients of national cuisine

Swedish cuisine is traditionally called home and rustic, it is dominated by the most simple products – meat, fish, cheeses, game, bread. Mushrooms, berries, dairy products are also used. Locals add lingonberry jam instead of a bouquet of spices, season them with a wide variety of dishes.

Many Swedish dishes, traditional in national cuisine, are prepared from ordinary herring, it is served with a special sauce, light wine, mustard, and seasoned with lemon. Be sure to try seafood dishes, most often served with mussels, squid, oysters, crabs. Swedes are excellent hunters, so they can expertly cook any game – venison, poultry, pork, moose.

Surely people far from travel are familiar with the concept of “buffet”, it has long gone beyond the borders of the country. This method of serving dishes has appeared in Sweden for a long time. When guests came to the Swedish castle, and it was necessary to feed a lot of people, hospitable hosts set tables with the possibility of independent choice of dishes.

Locals strictly adhere to certain etiquette at the table. If you were invited to a holiday, you can’t:

Swedes pay great respect and attention to food; they prefer to grease and bake the products on their own.

Culinary tours to the Scandinavian country today are becoming very popular. The explanation is simple – traditional Swedish dishes are made from organic products and do not have synthetic flavors. Local chefs rarely use spices in their work, the main task of the chef is to emphasize the natural, clean taste of each ingredient.

The traditional buffet consists of salads, slices, a wide variety of sandwiches. Be sure to try canapes with salmon smoked on juniper twigs.

Most traditional fish dishes use herring. Only the most courageous gourmets can try the national Swedish dish, surströmming, because of the smell, which literally knocks you down. The Swedish rotten herring dish is undoubtedly one of the top 10 Swedish dishes. Fish are caught in the first half of spring, fermented in wooden containers for several months, after canned.

Good to know! Due to the fermentation process, the cans become round.

A Swedish dish is traditionally prepared for the holidays. To hide a specific smell, it is served with potatoes, bread, herbs, sour cream and cheese. In Sweden, rotten fish is eaten only on the street, because the smell in the house is difficult to withstand.

In Swedish cities, traditional cancer parties are common, they are usually held in August. Freshwater crayfish are caught, boiled in large containers with dill and, comfortably located right on the balcony or terrace, eat them, washed down with beer and schnapps. In the 16th century, only representatives of the aristocracy could afford this dish; gradually, crayfish became a national dish accessible to all segments of the population.

So the locals call a special shrimp cocktail, laid out on a crispy toast. The national dish is traditionally prepared for the holidays, decorated with red caviar on top. In addition to shrimp, the composition includes pickled onions, lemon, dill, Dijon mustard and mayonnaise. White bread is dried in a skillet or in a toaster and the shrimp salad is laid on top.

What to try in Sweden for food lovers of meat delicacies? A special place in the national cuisine is reserved for game. The most popular dishes:

Meat is often served along with home-made dairy products – sour milk, soft cheese. Traditional Swedish dishes are high in calories. Game, as a rule, is fried on lard.

Good to know! As a side dish for meat dishes use beets, potatoes. Be sure to serve a lot of bread. It is noteworthy that in each region, bakery products are baked according to their own recipe. For example, barley flour is used in Norrland, and crisp bread is preferred in the central regions.

An old national dish, preserved from the time of the Vikings. There are many recipes for the dish, but one fact unites everything – the composition includes boiled meat (beef, lamb, pork) and vegetables (beans, cabbage, peas).

There is a version that the grutta recipes were preserved in modern national cuisine only due to the fact that for a long time there were no gas and electric stoves in areas remote from the capital, respectively, the products were cooked in the old way – above the hearth in a large saucepan.

It is difficult to imagine a traditional buffet without spicy sausages made of pork – instant gangs. They are distinguished by a bitter taste, which not every tourist from Europe will like.

Pyutippana is a national dish that resembles a traditional hodgepodge. In Sweden, it is a stew of various meat delicacies and potatoes. For its preparation, they use everything that remains in the house – kupaty, boiled chicken, meatballs, add bacon and stew with potatoes.

Swedish meatballs are well known throughout the world. These are ordinary meat balls with spices, fried in a pan. Serve meat treats with mashed potatoes, cranberry jam, hearty gravy.

Interesting fact! The cost of meatballs is low, so students buy them and eat them all year round.

This is a beer based soup. Fairly easy to prepare and hearty national dish. Instead of traditional broth, one of the most popular drinks in the world is used – beer. The dish is common in the Scandinavian countries and Germany, but it is best prepared in Sweden. It is believed that the Swedish recipe is classic. In addition to beer, eggs, flour, salt, sugar, milk are needed.

The cooking technology is as follows:

Served with crackers. Initially, the dish was prepared for sailors, since the soup warms perfectly in cold weather.

Pea soup with pancakes will make you feel like a real Swede. In addition, refreshments are associated with a specific day of the week, because they prepare a national dish only on Thursday. A tradition arose in the past – with the help of a hearty soup, people prepared themselves for Friday Lent. Many Thursdays restaurants serve traditional pea soup and pancakes with lingonberry jam.

Interesting fact! There is another version of the emergence of an interesting culinary tradition – pea soup with pancakes was prepared for the servant, who worked on Thursday morning.

Want to treat yourself to a delicate, diet dish? Order oyster cream soup nasselsuppa-lead-egg. Liquor and oatmeal are added to it, and served traditionally with a sweet punch.

Sweet tooths will certainly find interesting treats in the national cuisine of Sweden.

Try traditional waffles – sult, they are served with confiture, chocolate, cream. On March 25, Sweden celebrates a waffle day when the whole country enjoys the taste of dessert with pleasure.

Included in the list of the most delicious national desserts in Sweden. A treat is prepared from whipped proteins, jam, chocolate, various berries.

In Sweden, it is difficult to resist the temptation, because before the eyes of tourists a considerable amount of treats flashes. To give the dessert a rich flavor, local chefs add almonds, rhubarb.

Interesting fact! As a souvenir, bring friends from Sweden with natural marmalade and handmade chocolate candies.

The status of the most sought-after soft drink among Swedes has been holding coffee for a long time. Local coffee varieties – Zoegas (saturated, dark roasted), as well as Gevalia (with a hazelnut flavor) at first glance seem not strong enough, however, the Swedes only drink it with almonds and marzipan. A cup of aromatic drink necessarily serves sweetness. Locals love to sit and chat with friends over a cup of coffee punch with cognac.

Interesting fact! According to statistics, Sweden is the third largest coffee user in the world.

How to keep warm?

Alcoholic beverages are an indispensable attribute of local cuisine and a festive table. Punch is traditionally prepared, and on winter evenings they are warmed with glogg – it is mulled wine with vodka and a set of spices. For a gift to a man, experienced tourists offer to buy branded tincture of Branvin or Aquavit.

In the Skon region, grapes are grown and quite good wine is prepared. Barley is grown in the north of the country – beer and whiskey are produced here. The most famous alcohol brand is Absolut vodka, which has been produced since 1879. The shape of the bottle was used by analogy with a regular pharmacy container, and the absence of a label allows you to see the contents. Today, the concern produces vodka with the taste of blackcurrant, black pepper, the taste of citrus, raspberry flavor.

Swedish cuisine conquers with its simplicity, natural tastes and, of course, in common with Slavic culinary traditions. The best way to learn about the gastronomic habits and traditions of the Swedes is to go on a gastronomic tour.